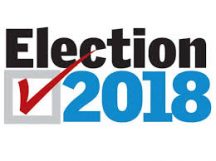 The Association of New England Football Officials held its annual business meeting on Monday, November 5, 2018. A well-represented, robust group of officials were in attendance. After the reading of the minutes and a discussion about old business and new business, an election was held.