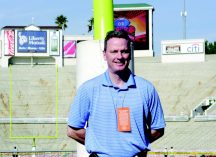 Bryan Platt, an ANEFO and Division I College Football Official, has a new position; this time its off the field.

“Commissioner Mike Aresco has announced the hiring of Bryan Platt as the American Athletic Conference’s Supervisor of Football Officials. Platt, who has officiated many of the biggest games in college football during his 21 seasons as an on-field official, will be the primary point of contact on officiating matters between the conference and its 12 head football coaches. He will work under the direction of Dennis Hennigan, the Supervisor of Football Officials for the Atlantic Coast Conference and the administrator of the officiating alliance between the two conferences.

“It is a pleasure to welcome Bryan back to the American Athletic Conference,” said Aresco. “He has distinguished himself through a long and successful career at the highest levels of college football and has annually officiated many of the biggest games across the nation. We are confident that Bryan’s expertise and integrity will make him an effective supervisor of our football officials and a valuable resource for our member schools.”

Platt had served as an on-field official since 1994 and has worked 14 postseason games in his career. He spent the past five seasons as a back judge for the ACC and was part of the crews that worked the 2015 ACC Championship, the 2016 Cotton Bowl and the 2017 College Football Playoff semifinal at the Rose Bowl. Platt spent 10 seasons as a side judge and back judge with the Big East Conference and was part of the American Athletic Conference’s roster during the league’s inaugural season in 2014. He was chosen to officiate the 2009 BCS National Championship at the Rose Bowl as well as the 2012 Rose Bowl and the 2013 Orange Bowl. Platt spent two seasons with the Atlantic-10 Conference as a side judge and was a back judge for the Eastern College Athletic Conference for seven years. Platt had served as an Assistant Supervisor of Football Officials for the Northeast-10 Conference since 2011.