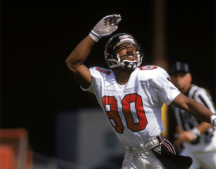 There was a meeting of the ANEFO on Tuesday, September 10, 2018. First, Skip Likins, ANEFO President, discussed his expectations for future meetings. He also indicated that videos and discussions would be part of all meetings. Later, Tom Brow, ANEFO Rules Interpreter, discussed several situations involving valid and invalid fair catch signals inside the 25 yard line. Next, he presented a “You Make the Call” scenario involving a punt, a block in the back, a bat in the end zone, and a ball out-of-bounds.  Later, several 2018 NCAA referee video training clips were presented to the officials.  The handout with the answer to the “You Make the Call” scenario is attached below.