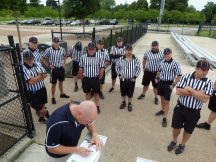 The ANEFO On-Field Technique Clinic was held on Saturday, July 29, 2017 for our new officials. The event was a big success and was held on the turf field at Woburn High School. Although the on-field technique clinic was geared for our new officials, all ANEFO members were welcome to attend to sharpen their skills. Lead by John Mattuchio, President; Brian Doherty, First Vice President; Tommy Brow, Rules Interpreter; Mark Carter and Steve Ultrino; the candidates rotated to four different stations on the field. John covered the on-field techniques of the linesman position. Brian covered the on-field techniques of the field judge position. Tommy and Mark covered the on-field umpire position (and how the umpire communicates or interacts with the referee); and Steve covered the back judge position. A few players from the Woburn High School football team took the field to simulate game conditions and player locations; a special thank you to the Woburn coaching staff and especially the players! As the officials rotated to the four technique areas on the field, each group of officials were presented with different scenarios as well as discussions, thoughtful questions, game-day situations, and insightful reflections. Rules were clarified, underhand tosses were perfected, and field techniques were demonstrated and clarified. Great job to all those who were in attendance!