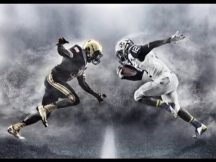 Rich Harrington and Craig McDonnell, both ANEFO officials, along with Tommy Brow, ANEFO rules interpreter, and Jock Patterson (former assistant football coach at several schools including Tewksbury, Lowell Catholic and Alvirne in Hudson, N.H.,) were the featured guest speakers at the ANEFO meeting on October 16, 2017. The topics of the evening included: Rule 9 – Major Fouls and some interesting plays. Their handouts, summary of their presentations, video clips, and/or resources are located at the bottom of this article.

Tommy started his presentation with a video clip of a kickoff with three second left in an Ohio high school football game that happened last week; the return featured five backward passes and an eighty yard run only to the stopped at the kicking team’s two yard line.  Next, there was a discussion of the controversial touchback call in yesterday’s Patriots-Jets’ game and how the loose ball fumble rules near the goal line apply under our NCAA/high school rules. Later, Tommy presented some more interesting “You Make the Call!” scenarios this time involving: 1) A fumble, a ball at rest, a defensive muff into their opponent’s end zone and a foul in the end zone.  2) A backward pass from the end zone, a muff, and a foul in the field of play. The members had an opportunity to “turn and talk” to other officials before the scenarios were clarified. Next, Jock, who had asked and received permission to speak at an ANEFO meeting, spoke eloquently about his passion to reduce the number of concussions in football by instituting quicker whistles – similar to preventative whistles in wrestling.  Finally Rich and Craig discussed various majors fouls including the first and second definitions of targeting, the two low blocking zones (the tackle box and the low blocking box), who can block low and where, and sideline interference.  They concluded their presentation with several very informative NCAA video clips that illustrated targeting fouls, launches that are not targeting, chop blocks, referee’s duty to stay with the quarterback and not “ball watch” during pass plays, peel-back blocks, roughing the quarterback, and how officials ought not escalate emotional situations with coaches.