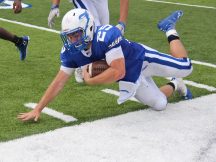 Dan Foreman, a college and an ANEFO official, along with Tommy Brow, ANEFO rules interpreter, were the featured guest speakers at the ANEFO meeting on October 30, 2017. The topics of the evening included: Rule 4: Ball in Play, Dead Ball, and Out of Bounds, and some interesting plays. Their handouts, summary of their presentations, video clips, and/or resources are located at the bottom of this article.

First, Tommy started his presentation with an interesting video clip from a recent high school football game during which a flag was thrown for five-players in the backfield, then picked up and waved off, after a touchdown was scored.  Next, Tommy presented some more interesting “You Make the Call!” scenarios this time involving: 1) A forward pass caught beyond the line scrimmage, fumbled backward, recovered by the passing team, and the enforcement spot for a roughing the quarterback penalty.  2) A run that end behind the neutral zone preceded by a defensive block below the waist on an eligible pass receiver within the five yard defensive blocking belt.  Whew!  The members had an opportunity to “turn and talk” to other officials before the scenarios were clarified. Finally, Dan discussed invalid signals during a loose ball, a receiver stepping out-of-bounds then catching the ball in bounds, sideline catches, punt recoveries near the goal line, mechanics for bracketing the goal line, use of the bean bag near the goal line, a runner’s helmet coming off during a tackle just prior to reaching the first down line to gain, and the ground causing a fumble misconceptions. Dan also presented a quiz and several very interesting college football training videos.

Kicking Team Momentum at the One  <–(Foreman’s video)