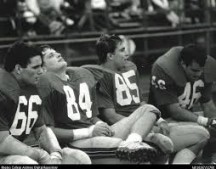 Michael Lightbody, featured guest speaker, and Tommy Brow, Rules Interpreter, discussed substitution plays at the ANEFO meeting on October 20, 2014.  Their handouts and/or resources are located at the bottom of this article.  First, Michael discussed substitute rules infractions, a case study of illegal substitution, a case play of illegal substitutions, and the interesting 2010 college football game between LCU vs. Tennessee.  The latter team held LCU on the one-yard line on the last play of the game for the apparent victory.  However, the Tennessee defensive had 13 players on their side of the ball.  This allowed one untimed down and a LCU victory.  Later, Tommy Brow discussed the following in his presentation: breaking the offensive huddle with 12 or more players, leaving on the wrong side of the field, not enter the field from the team area, a defensive huddle or formation with 12 or more players, and the significance of the nine-yard marks on substitutes.  Several engaging “you make-the-call” play situations were also presented.