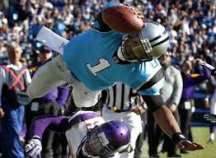 Anthony Fullana, an ANEFO official, along with Tommy Brow, ANEFO rules interpreter, and Lou Levine, Officials vs. Cancer, were the featured guest speakers at the ANEFO meeting on October 23, 2017. The topics of the evening included: Series of Downs – Line to Gain and some interesting plays. Their handouts, summary of their presentations, video clips, and/or resources are located at the bottom of this article.

First, Lou Levine, who asked and received permission to speak at the ANEFO meeting, spoke eloquently about a very worthy cause called “Officials vs. Cancer”; he explained what football officials, players, coaches, and fans could do to help find a cure for cancer.  A video clip about his efforts to raise awareness and funds for the American Cancer Society was presented to the audience. Next, Tommy started his presentation with a dilemma as to whether to start the clock on the ready or the snap after an interception and penalty with 0:04 seconds left in the game.  Next, Tommy presented some more interesting “You Make the Call!” scenarios this time involving: 1) A forward pass tipped in the end zone followed by a second forward pass from the end zone.  2) A forward pass during an illegal formation, a fumble, a recovery be the defense, a fumble just short the end zone, a foul in the end zone by Team B and the ball eventually rolling out of the end zone.  Whew!  The members had an opportunity to “turn and talk” to other officials before the scenarios were clarified. Finally, Anthony discussed first downs after a legal kick play, the line to gain, his protocol for working with his chain crews, switching the chains at the end of quarter and the importance of recording the down, the distance to gain, the yard line, the yard the clip is on, and the yard the back box is on.  Anthony then offered some very interesting video clips such as: 1) Buccaneers vs. Redskins game in 2010 during which the 5th Down was permitted in error. 2) Cam Newton’s amazing “superman” dive for touchdown that ought to have been called!