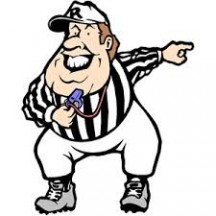 A “Techniques Clinic” was led by featured guest speakers: Jack Walsh (R), Joe Cronin (U), Dave McCarthy (HL), Alan Bartolini (L), and Matt Preston (BJ) at the ANEFO meeting on September 21, 2015.  Their handouts and/or resources, along with Tommy Brow’s rules presentation are located at the bottom of this article.  First, Tommy Brow, rules interpreter, discussed plays involving a “clean hands” penalty situation at the end of a game, unsportsmanlike fouls on a try, blocking an eligible receiver below the waist, batting a ball in the end zone, a one-point safety and batting a ball during an onside kick.  Later, the officials dividing into five groups, led the by the guest speakers, for a discussion about their specific positions and techniques on the field.  Throughout the evening, President Hegan gave the two-minute warning allowing time for members to rotate to the various technique presentations.  For more information, see their handout below.