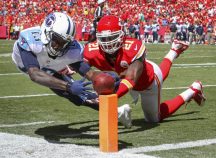 Steve White and Chris Clemente, both ANEFO officials, along with Tommy Brow, ANEFO rules interpreter, were the featured guest speakers at the ANEFO meeting on October 2, 2017. The topics of the evening included: Rule 8 – Scoring and some interesting plays. Their handouts, summary of their presentations, and/or resources are located at the bottom of this article.

First, Tommy presented some more interesting “You Make the Call!” scenarios involving: 1) A block punt, a fumble, and foul. 2) A blocked field goal attempt, ball crossed the neutral zone reverted back behind the line of scrimmage, then batted into the end zone. 3) A block field goal attempt, ball did not cross the neutral zone, then was batted into end zone. 4) An interception in the end zone, a foul in the end zone, and a fumble from the end zone into the field of play. The members had an opportunity to “turn and talk” to other officials before the scenarios were clarified. Next, Steve and Chris presented college video clips for the SEC involving goal line plays. The video clips illustrated how important it is to know the rules involving goal line plays and the mechanics of officiating goal line plays. They stressed rules, knowledge, positioning, and concentration. They also presented a an interesting video clip from an historic Oregon vs. Kansas State football game in which a rare one-point safety was awarded after the defense blocked a point after at touchdown try, recovered the ball, retreated with the ball, and was eventually tackled in the their own end zone. Later, Steve and Chris took turns discussing goal line positioning and mechanics, conferring with other officials before signaling, try attempts, mechanics, fouls during a try, use of bean bags, safeties, and touchbacks.