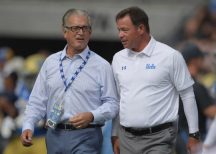 Brian Doherty, President, and Tom Brow, Rules Interpreter, presented and discussed two video clips of recent college football games with emphasis on how the rules are different in high school federation games at the ANEFO Meeting on Monday, October 7, 2019.

The first video clip titled “Fox Sports NCAA Week 4 with Mike Pereira” highlighted: a legal play from a victory formation with 18 seconds left in the game (this legal deception caused a robust discussion), forward pass play, a controlled catch, chop block, defensive pass interference, defender out of bounds jump and catches ball, block after a fair catch signal and kicking team offside, snapping the ball before officials are in position, goal line play, backward pass, offside, breaking the plane, DPI, blindside blocks, spots downfield on where the infraction was vs. where the flag landed, targeting, unsportsmanlike fouls after a touchdown, and a kick caught after a teammate signals for a fair catch.

The second video clip titled “Fox Sports NCAA Week 5 with Mike Pereira” included: low blocks and a late hit, neutral zone infractions, knee down after catching a kick, total control on a completed pass, blindside blocks, targeting, illegal deception from an irregular ship designed to draw the defense offside, goal line mechanics, diving for a pylon, a muff on a punt, forward fumble, holding, sideline warning and hit a quarterback low when a quarterback jumps to throw a pass (both feet off the ground when contacted).

Finally, Tom Brow discussed another “You Make the Federation Call?”  This week’s scenario involved a blocked punt in the end zone by B5, the ball coming to rest in the end zone, the B5 muffing the ball out of the back of the end zone.  The handouts are located below: